related similarities and differences faced by alumni of gandhi, mandela, abed
Abed Bhai from poverty alleviator to new university coalition builder
Unlike machines humans are networked by positive or negative energies- positive intels include faith, hope, love, trust, courage to appear communally strong to those depending on you. when villagers have no access to electricity grids, at ground level these values are not advertised their empowerment depends on the reality of one to one, and one to village circles of up to 40 people.For the first 3 decades of fazle abed's empowerment of women and rural nation building all solutions to safety, health, education, love (professional do no harm), finance depended on bracs front line service co-workers and millions of villagers person to person integrity.
As we entered the new millennium the 64 year old fazle abed could see early partnerships in the vilage arriving round solar electricity and mobile phones. he spent his last twenty years searching for the deepest partnerships ngo world has ever linkedin- but he also knew he would see whether these technologies would need to be useed if youth were to become the sustainability generation. even as he never left his first love serving villagers he started to debate the idea that only new universities could complete the dream of a poverty-free world

how did the hardest work ever done by women or men network across rural continental asia 1975-2000 without access to electricity grids but my multiplying the best of womanpower and manpower
================================
if you connect with brac university to become joyfully aware of the above lessons and how to 5-factor the 17 sdgs--
you will be ready to apply the other frameworks that sir fazle abed spent 50 years demonstrating until the largest ngo partnership in the world linked in round brac at his time of death 2019
these are
the 5 global markets UNITS parents should demand young half of world own most share in IE University, Infrastructure-Nature, Tech, Sports
the 5e's of microfranchising and the 5 value chains of development economics
and partner wizards of poverty leapfrog ahead of each 1G to 5G decade- eg because village women never hand landline telephones what did they invent when first partering with mobile phones

Posted by chris macrae at 8:45 AM No comments:

.HESI Special Event: Where Next? Reimagining Further Education for the Future
The SDG Academy
On July 8, 2020, the Higher Education Sustainability Initiative (HESI) hosted this special event alongside the United Nations ...

transcript extract 80.40  president arizona state uni, with covid and other www community crises, we are where we are, not only because of politics and capitalism, but at the root of it all is us the universities- we are universally inadequate to what lies ahead in terms of the future of our species and our relationship to our beautiful planet which we are all dependent on -let me outline 5 inadequacies

Ok. Thank you, President Crow. I like the way you framed it because this
Posted by chris macrae at 12:38 PM 1 comment:

do you accept partnerships with cities in spain

i do some research for the american international school in barcelona where every student does a service learning project
https://www.winwinconnection.org/marta-bio
i can introduce you to marta vernet who heads this work where 11th and 12th graders in particular aim to do sdg work abroad using their multilingual capabilities and unique connections. we met at two of the wise global educational laureates summits
i have introduced her to the former president of ecuador who is a mover and shaker of cop summits and whose colleague was last years head of the un general assembly
i first came to admire barcelona while doing research for the european union - it won knowledge city of the year award
i believe that while most schools have to zoom the opportunity to multiply your wonderful program internationally is unique and so urgently needed by youth
dear project cities team, asu global
we are currently surveying multiple dual language schools having connected with francis jaumont author on this subject and attached to the french mission in new york
if cop26 goes ahead in nov 2021 i will be pulling out all the stops to connect my home town and adam smith alumni with like minded movements
sincerely
chris macrae washington dc +1 240 316 8157
family foundation of norman macrae japan order of rising sun, uk CBE
host of the economist's entrepreneurial revolution dialogues since 1972
Posted by chris macrae at 12:00 PM No comments:

what is education doing to children everywhere - part 1 hong kong

fortunately hong kong is on the case at www.yidanprize.org by tencent's c-founder

As Hong Kong’s busy children return to schools, time to rethink the point of education

Why you can trust SCMP

Why China is becoming a target of jihadist hatred, like the US

This Week in Asia

Hong Kong’s food price inflation may have only just begun

China’s socialism is not the problem, US ambitions are

Why Hongkongers should be thankful for city’s health care services

Take all precautions as schools reopen

Why some Hongkongers who ‘don’t like it here’ are staying

China’s dual circulation strategy is a step towards sustainable trade 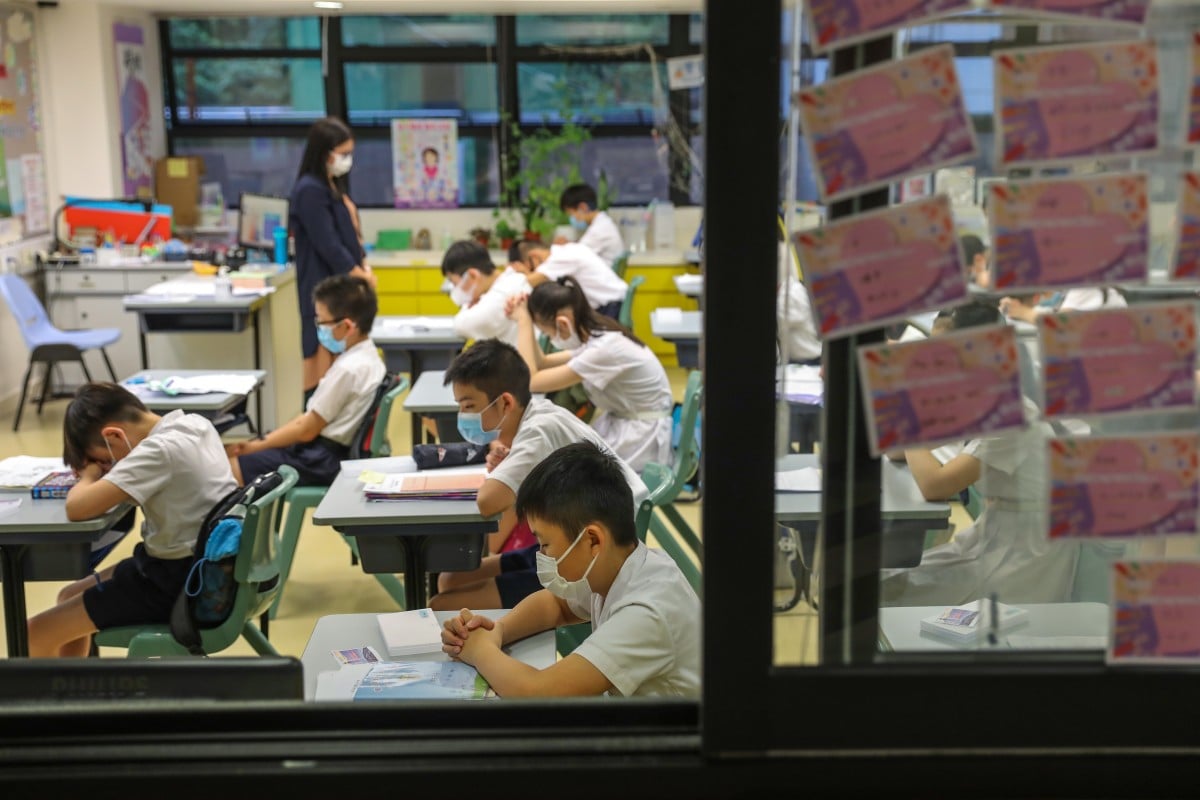 Primary school students in a Wan Chai school pray for the Covid-19 pandemic to ease before class on June 8. Photo: Nora Tam
Hong Kong’s schools are
set to reopen
on a phased basis in a week or so. That is good news indeed, especially for parents, who have had to shoulder more responsibilities with their children learning from home. In addition to a perhaps new-found appreciation for teachers, Hongkongers can breathe a sigh of relief now that we seem to have Covid-19 under control.
Understandably, some educators and parents are
worried
that students – especially those in critical years who have academic qualification tests to take and scores to worry about – not being able to catch up.
It has been the norm for Hong Kong students to spend almost every waking hour engaged in the task of joyless learning – at school, at
tuition centres
, and at home with homework. We are a city obsessed with “winning at the starting line”. With the focus on training our students to stay ahead of every curve, falling behind is not an option.
Parents would pay whatever they can afford to make sure their children beat everyone else’s. And all this begins at a ridiculously young age – there are
interview coaching classes
for little ones who really should be playing full-time. But what seemed to be preparing our students for the cutthroat competition of the “real world” has unfortunate repercussions. 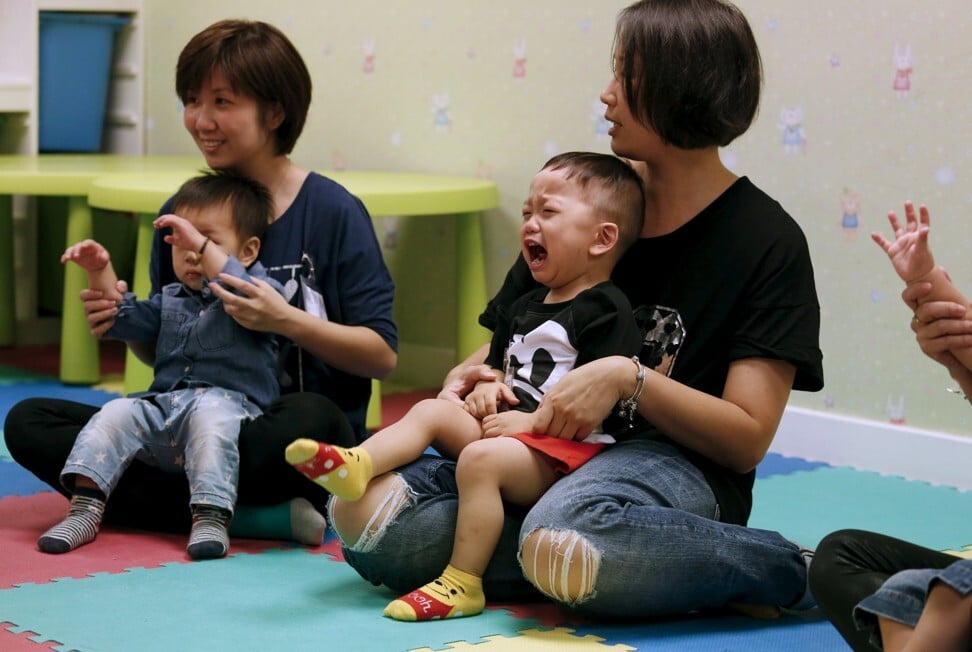 A child cries in the arms of his mother as they take part in a class preparing toddlers for kindergarten interviews in Hong Kong in 2015. Photo: Reuters
Study after study has pointed to the obvious: that our students are in
distress
. By 2015, the rise in student suicides had alarmed even our lawmakers, prompting a special education panel and legislators to suggest that schools put greater emphasis on non-academic achievements.
ADVERTISING
This fact – that our children are not OK – is not news. It’s tragic and remains a problem. Our education system has its share of problems. The liberal studies curriculum, for instance,
has been blamed
for supposedly playing a role in Hong Kong’s months-long protests. But that is a topic for another day.

What most people can agree on is that our education system has become so obsessed with academic performance that the stress placed on our students is enormous. There is very little self-satisfaction that can be derived from a system that piles on the pressure when children reach nursery age.

Hong Kong parents: stop pushing your children to win at all costs

Being taught to win at all costs is detrimental to our children’s development. When the importance of teaching and nurturing kindness and empathy is neglected, it is no wonder that they find
happiness and contentment
so unattainable.
OPINION NEWSLETTER
Get updates direct to your inbox
By registering, you agree to our T&C and Privacy Policy

Hong Kong’s education system needs a complete overhaul, from how we prioritise what we teach our children, to how they are taught, to the weight given to exam and test scores.

They say that crises are opportunities in disguise. Now may be the time for all of us to do right by our children. Being competitive to the point of breaking our children and ourselves, and suffering from a whole slew of
mental health issues
must be the absolute worst we can do to our children.

Instead, teaching them to be kind and considerate would equip them with the tools to be more resilient – the pathways to their success in the future.

Covid-19 has forced us to confront uncomfortable truths and
rethink
how we live our lives. The message that we are “stronger together” has resonance across borders. Now, is the point of education to get ahead at all costs? There must be room to learn to connect, understand, empathise with and care for others.

Cheer our children on to – in the words of the late Dr Maya Angelou – “be the rainbow in someone’s cloud”, because it is worth infinitely more than any pot of gold.

Posted by chris macrae at 7:46 PM No comments:

networking news with thanks to youth reporters at www.economistuniversity.com Education Commission - most exciting report on education to be issued UN NY 18 Sept

YC
Previously known as scotland rising, this co-blog celebrates the purpose of economics founded by Adam smith to optimalise sustainability and every being's livelihood

James wilson 1843 founded The Economist to media sustainability of youth through industrial revolution, by 1972 The Economist started searching for pro-youth leaders of- the third millennium twist that (1948-2018's) spending 1000 times more on worldwide communications - leads to valuing exponentials for a borderless world faster than being chained by orwellian big brothers -will we value the futures of youth, poorest and women in time to celebrate sustainability of 7 billion beings across all hemispheres?

before 1946. (starting 1843 missionary and diaspora scots launch free kirk and The Economist linking in 175 year long race to end poverty)